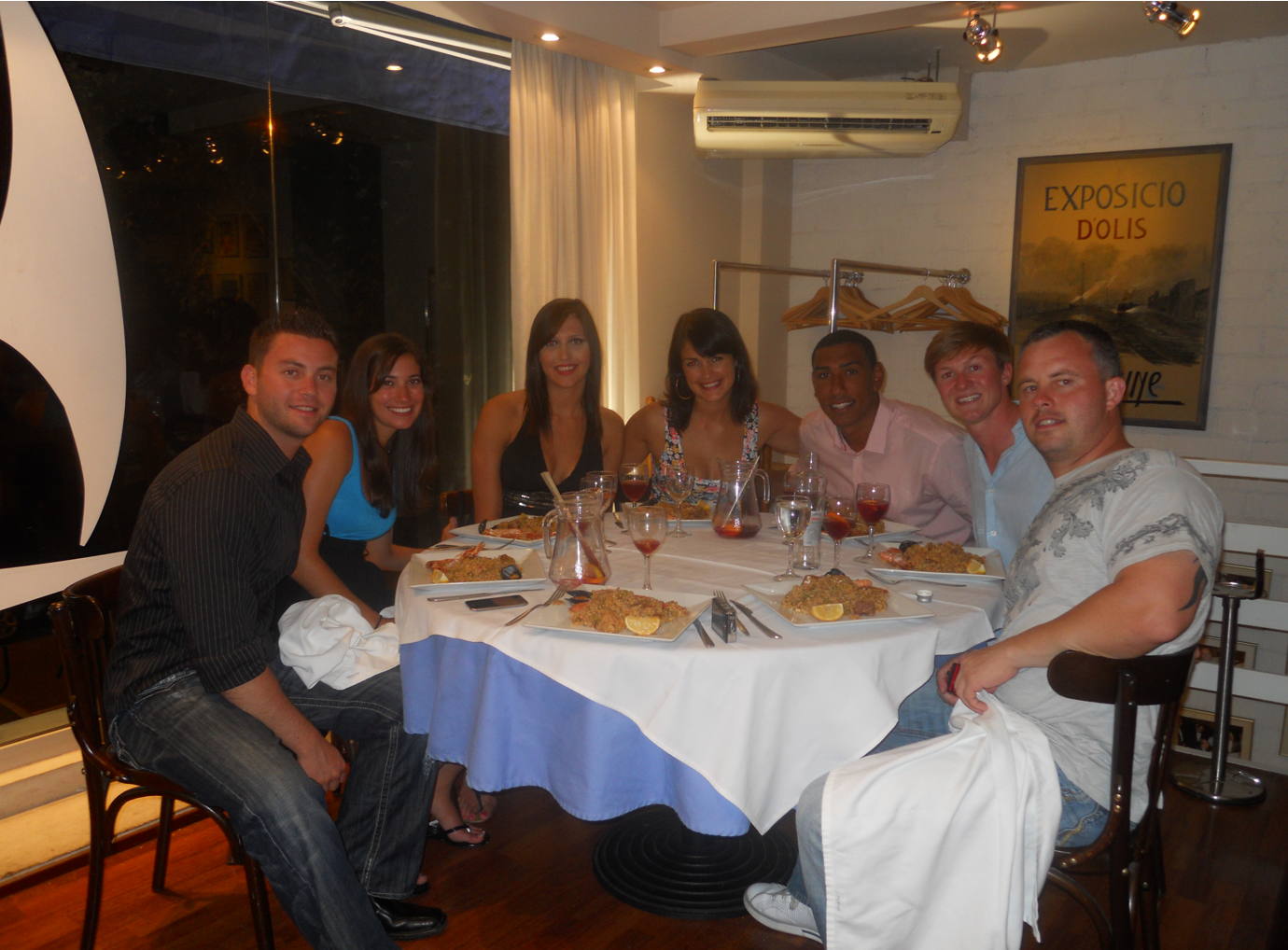 With Spain on its way to its first World Cup title, I woke up the next morning to start hopping trains until I made my way to Barcelona. Along the way I met nine law school students from The University of Florida, who despite our football-related differences, invited me to stay with them for the next few nights. On our first day, we sauntered down La Rambla, the central street in

Barcelona, and dropped by La Boqueria, the largest market in Europe, to snack on fresh fruit and sip on fresh sangria. Delightful. Speaking of delicious sustenance, I thought the Spanish cuisine was phenomenal. On my first night, I realized the gloriousness that is paella, a Spanish dish with anything and everything that’s in their kitchen at the time. Veal, crawfish, octopus, chicken, rice, steak, mussels, and vegetables were just a few of the ingredients I spotted in the local hodgepodge. Throw in some tapas to whet the appetite, and I couldn’t imagine a greater reason to move to Spain —aside from the siestas. 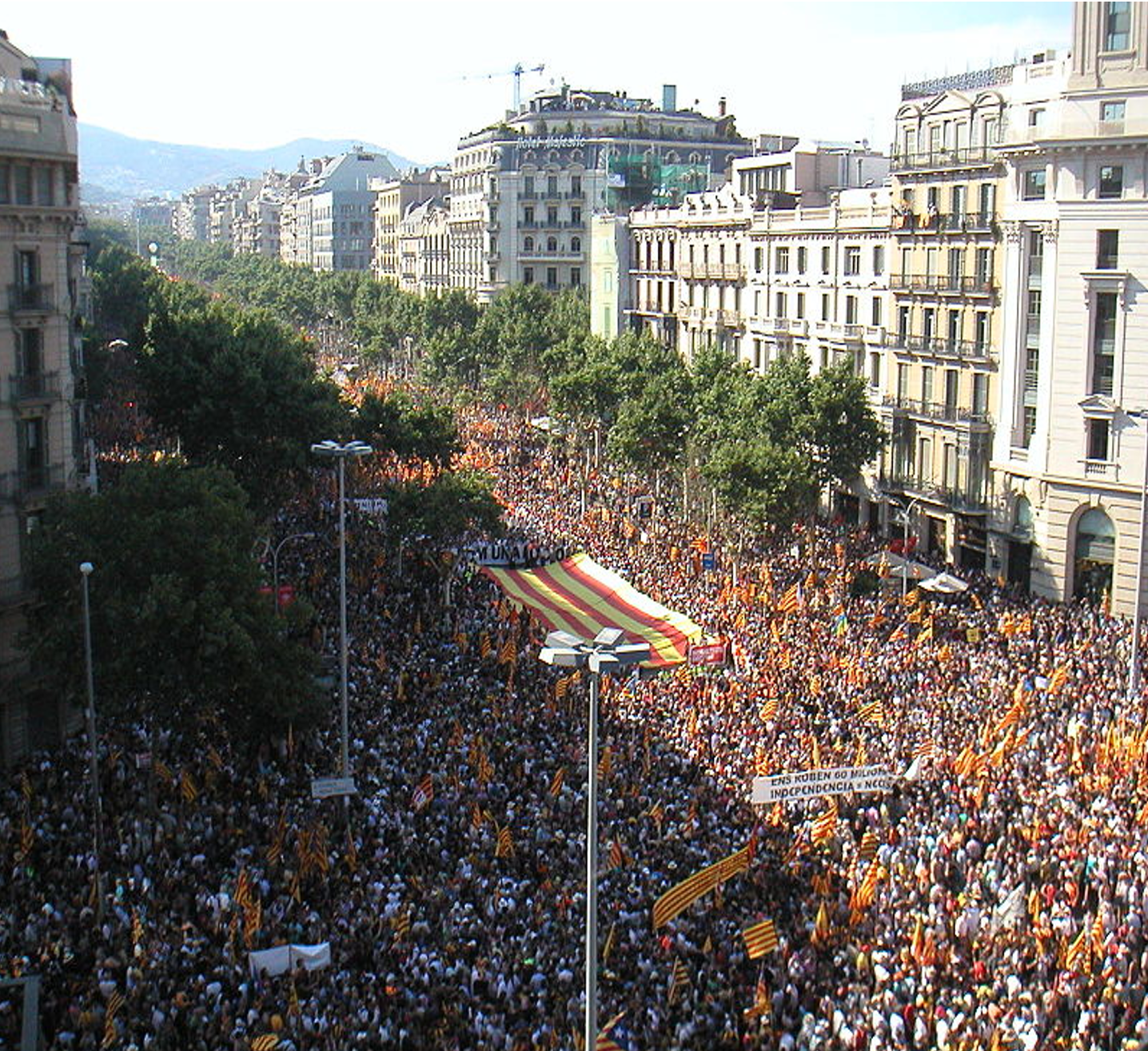 On our second day, a few of us decided to meander around and check out some of Antoni Gaudí’s architecture. Though our view of Casa Milà was not the one we expected as we ended up walking right into what the daily Barcelona newspaper called “without a doubt one of the biggest [protest] marches that has [ever] occurred in Catalonia, possibly the biggest.” The Spanish Court had recently annulled several parts of Catalonia’s autonomy statue, and the Catalonians apparently weren’t taking too kindly to the decision. A chameleon of European culture at this point, I decide that joining the masses would be far easier, and perhaps more exciting, than fighting my way to the other side of the street. A considerable amount of chanting and flag waving ensued. And while we’re on the topic of massive, unruly crowds, I’ll skip forward to the night of the world cup final. By this point, my UF friends had already gone on their way, and I had managed to find some UNC Chapel Hill law school students to stay with for my final two  nights. 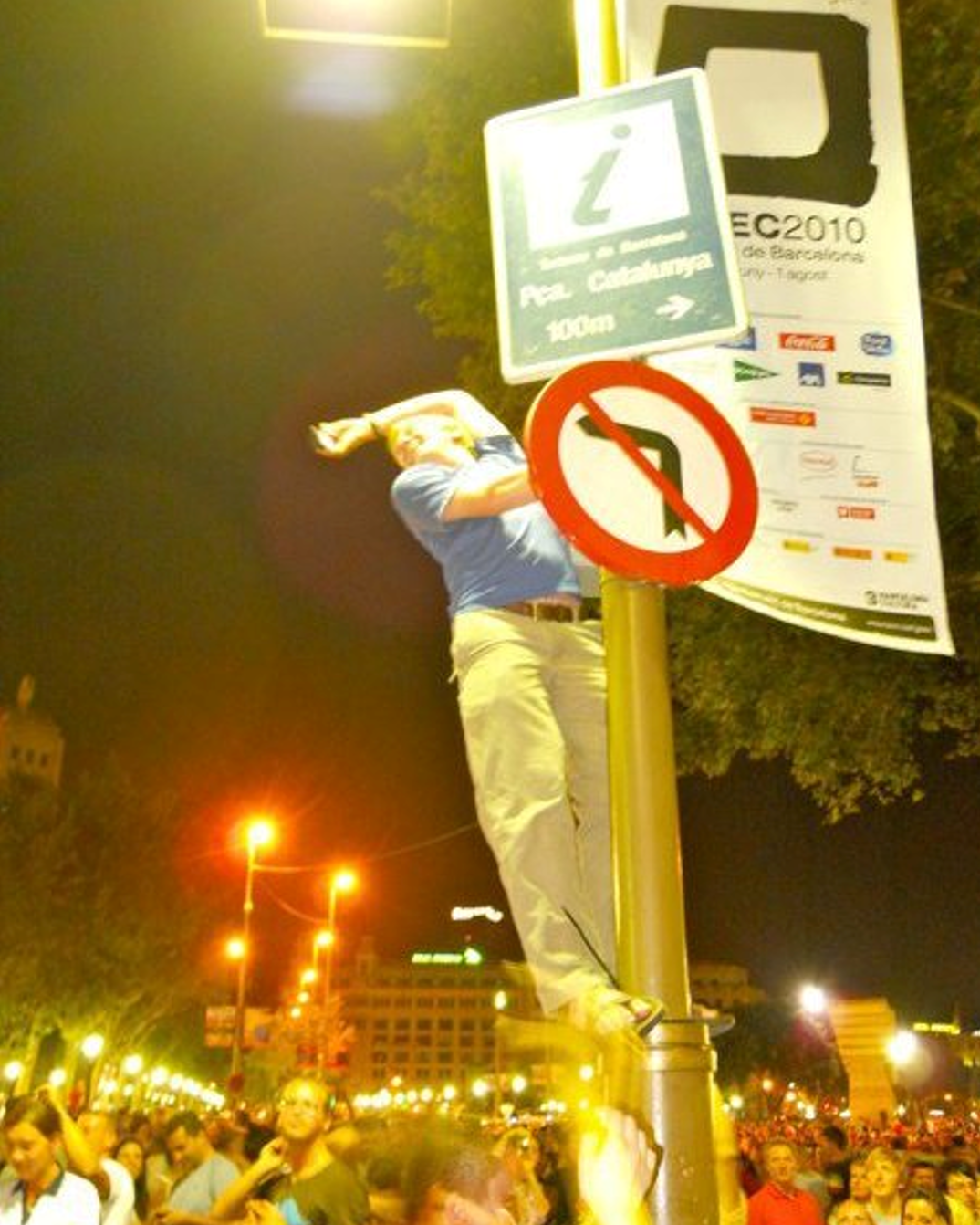 We watched the match in a bar off of La Rambla, where after the Spanish clinched their first title, a myriad of people poured onto the street and set it ablaze—fans unremittingly blowing horns, firecrackers exploding in the streets, children standing on cars. We drifted over to the Plaça de Catalunya, the de facto city centre, where amid 40,000+ screaming fans, I impulsively scaled the nearest light pole. Then came one of the most invigorating moments of my trip. After inciting an impromptu “Espania!” chant, I watched as it reverberated through the throngs of people for what felt like hours. “Youth comes but once in a lifetime”—Henry Wadsworth Longfellow

After an exhilarating four nights in Barcelona, I journeyed over to Pamplona for the last few days of the San Fermín Festival, a.k.a. “The Running of the Bulls.” Stepping off of the train, I observed a town absolutely enamored with what is easily the pinnacle of Pamplona’s communal calendar. From grandfathers to infants, everyone was clad in white shirts, white trousers, and red handkerchiefs. Unless they sold 1) souvenirs, 2) food, or 3) alcohol, all stores were closed during the entire week. And whether it was 4am or 4pm, you would find the same enormous crowds celebrating in the streets.

The encierro. Each day of the festival commences with the Bull Run, where around 7:30am, everyone gathers along/inside the 825m course. On the second to last day, I waited alongside a group of crazed Australians, whom I thought would be more appealing lure than myself to an angry pack of oversized bulls. 8am, or the start of the race, was looming. Three rockets are fired off over the course of the run. The first signifies that the bulls have been released onto the course. Aside from a few not-so- brave souls, most runners are slowly jogging at this point. The second rocket marks the last of the ten bulls leaving the pin. The bulls usually run in two packs, so when the last pack is released, the first pack is well on its way to inciting chaos. This is when most of the brave (read: harebrained) souls discern the hooves approaching, and everyone breaks out into a full-fledged sprint, dodging the equally hazardous obstacles of both bulls and runners. Not until the third rocket—indicating the conclusion of the run—is heard do people thank their respective deity for delivering them to safety. 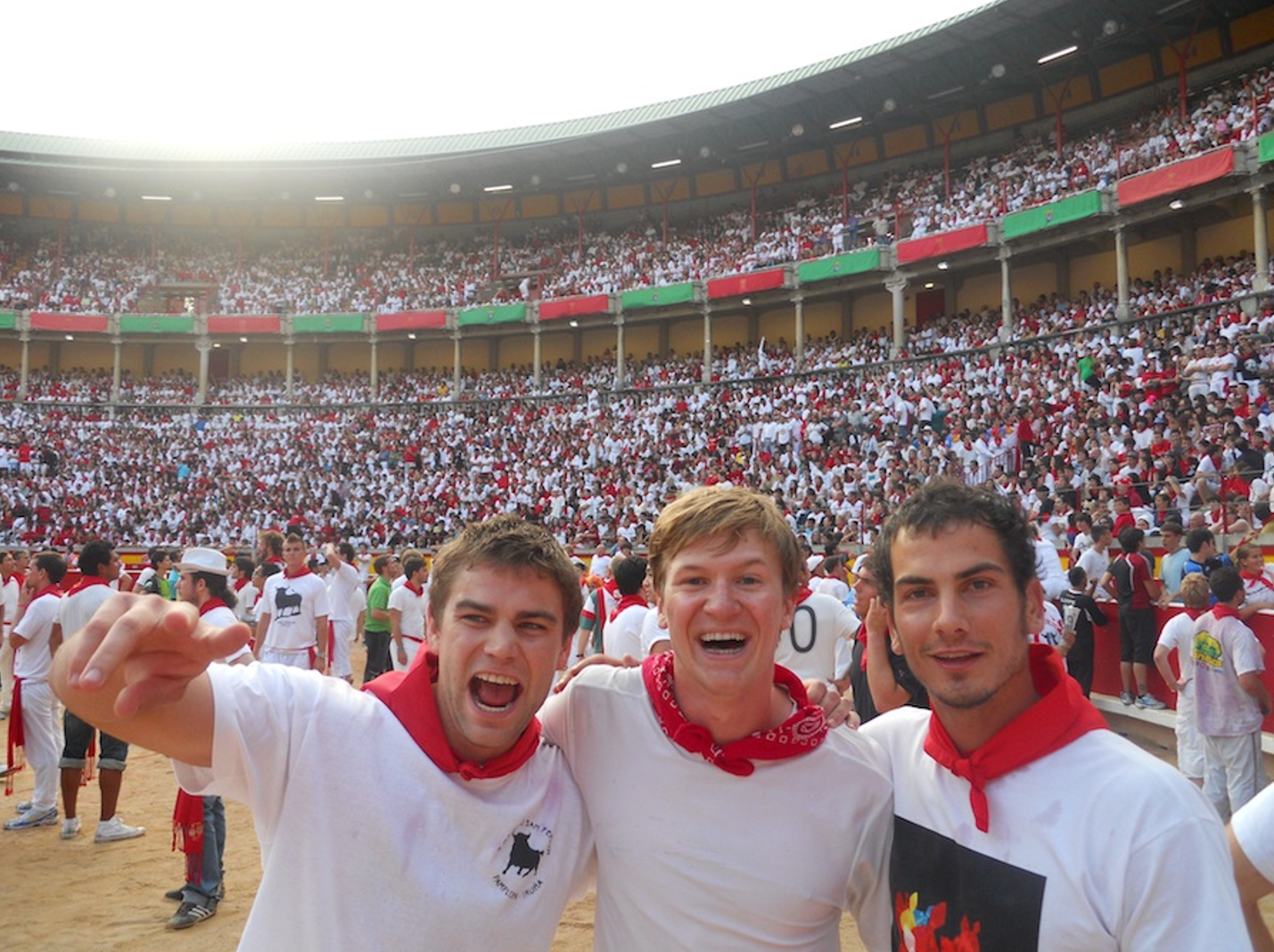 I had little problems with the actual run, having to dodge more runners than bulls and arriving in the bullring mostly unscathed. As you heard in my video, it is quite respectable to make it all the way to the bullring, because they close the doors moments after the last bull arrives, while a majority of runners are still on the course. Lucky enough to reach the ring, I joined the rest of the participants in continuing to test our fate over the next hour, all hoping to touch a bull and to avoid any reciprocation. After a few prayers, I garnered the courage to approach one, who instantly turned to me as the crowd made no effort to impede his progress. Caught in the headlights, I jumped up as he reached me, and I held on to his horns for dear life as he bucked me around to the crowd’s approval. After a few seconds that felt like days, I was able to hop off and high tail it back to safety, with only a bruise on my right hip from his horn. Heart pounding, I asked my new friend if he got any of it on film, and to my vexation, he hadn’t figured out how to work the video function on my camera. Though I had only planned on participating one day, I had to run the next day (when the video you’ve seen was made) to rectify the Luddite’s blunder… With fond memories of Spain for years to come, I looked forward to my Italian tour, which took place over the following week and a half.