A beautiful option for exploring Croatia is island hopping. We had a free day in Split so we bought ferry tickets the night before to go to the island Hvar for a day trip. (Alex and Elizabeth said we couldn’t miss it). Unfortunately, I got sick that night and couldn’t take the trip the next morning, so I’ll just have to return to Croatia to visit Hvar someday and go to Niko’s Place.
Croatia has some funny geography. The southern tip of the country which contains Dubrovnik is cut off from the rest of Croatia by a tiny strip of Bosnia and Herzegovina.  You can’t get from Split to Dubrovnik by land without leaving the country. So we took a ferry.

After 4 hours of sailing along the beautiful Dalmatian coastline and stopping at several islands along the way, we arrived in Dubrovnik. On the ferry we sat by an older couple who were spending 6 weeks in Croatia and Spain. They were incredibly cute together, both retired, and spending their retirement traveling and working with programs to promote international development through entrepreneurship. My favorite thing they said was that the more they travel, the more they believe in the goodness of mankind.

I agree, when you travel you do meet a few unsavory people, but I’ve met so many more kind people. People who have helped me when I am lost, welcomed me into their home, patiently tolerated my language barrier, graciously told me their stories– and it always convinces me that people are truly kind and normally want to help you.
Dubrovnik has exploded in popularity recently due to it’s debut as the site of “King’s Landing” in Game of Thrones. The only reason I know this is from the many Game of Thrones tours I saw all over the city- and my travel partner, Ashton, was an avid fan.

The history of the region is very complex. There was a terrible civil war in the 1990’s between Bosnians, Serbians, and Croats. It was a complex conflict, between Catholics, orthodox Christians and Muslims- a lot of whom had been living in harmony before the conflict. Our guide compared the conflict to  India and Pakistan, he said it is easy to fool people into believing something, and that people always want to define an enemy. For the Croatian poor, that enemy was the Serbs.
The borders constantly change in this region. Our guide’s grandmother had lived in 9 countries, and never moved from the city of Split. He said he found it ironic that there was so much conflict over the borders, but soon they would all be one under the EU-all those lives lost for nothing. (His personal opinion of a very complicated history).
The city of Dubrovnik was attacked during the war, and you can still see some of the buildings damaged by the shells.
The main site to see in Dubrovnik is a stone city wall with forts and towers surrounding the Old Town. I took the opportunity to walk the walls, making a loop around the entire complex. The Minceta Tower is the highest part of the walls and offers beautiful views. 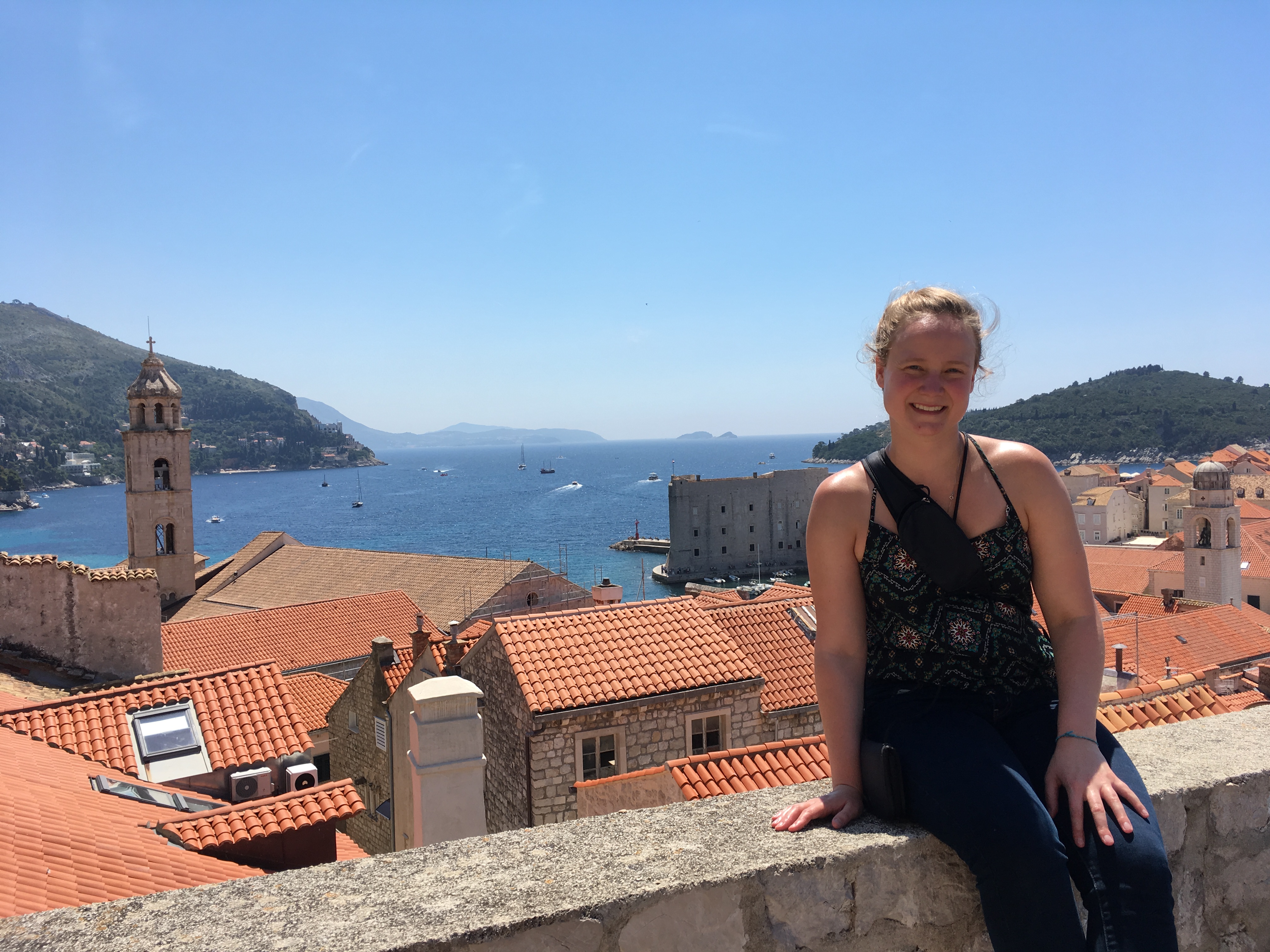 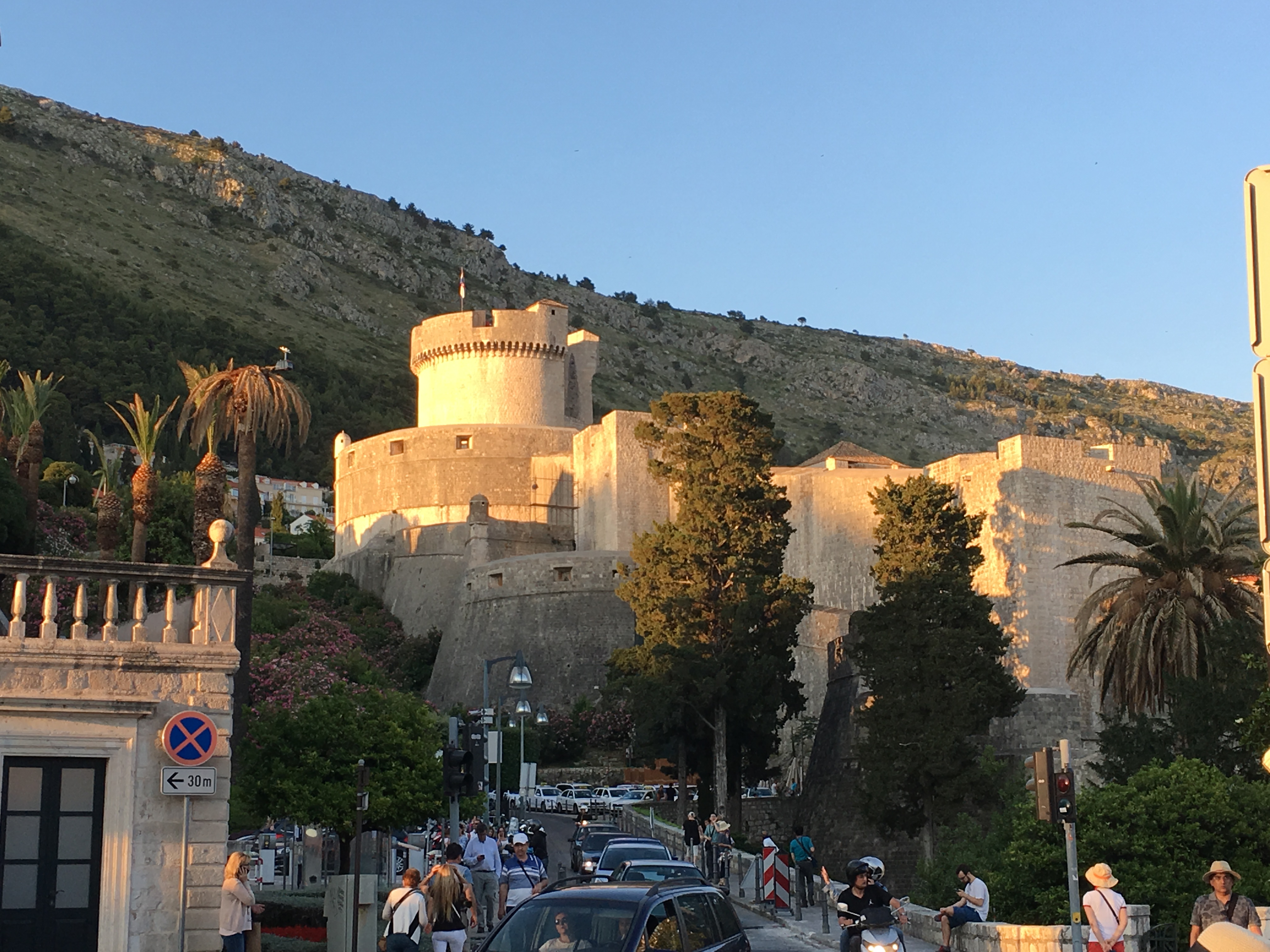 We wandered through the streets inside the walls, eating dinner in an open-air restaurant along a back street. We found a bar on the outside wall facing the ocean to sit at sunset. It was hard to find-through an unmarked door in the far edge of the Old Town. 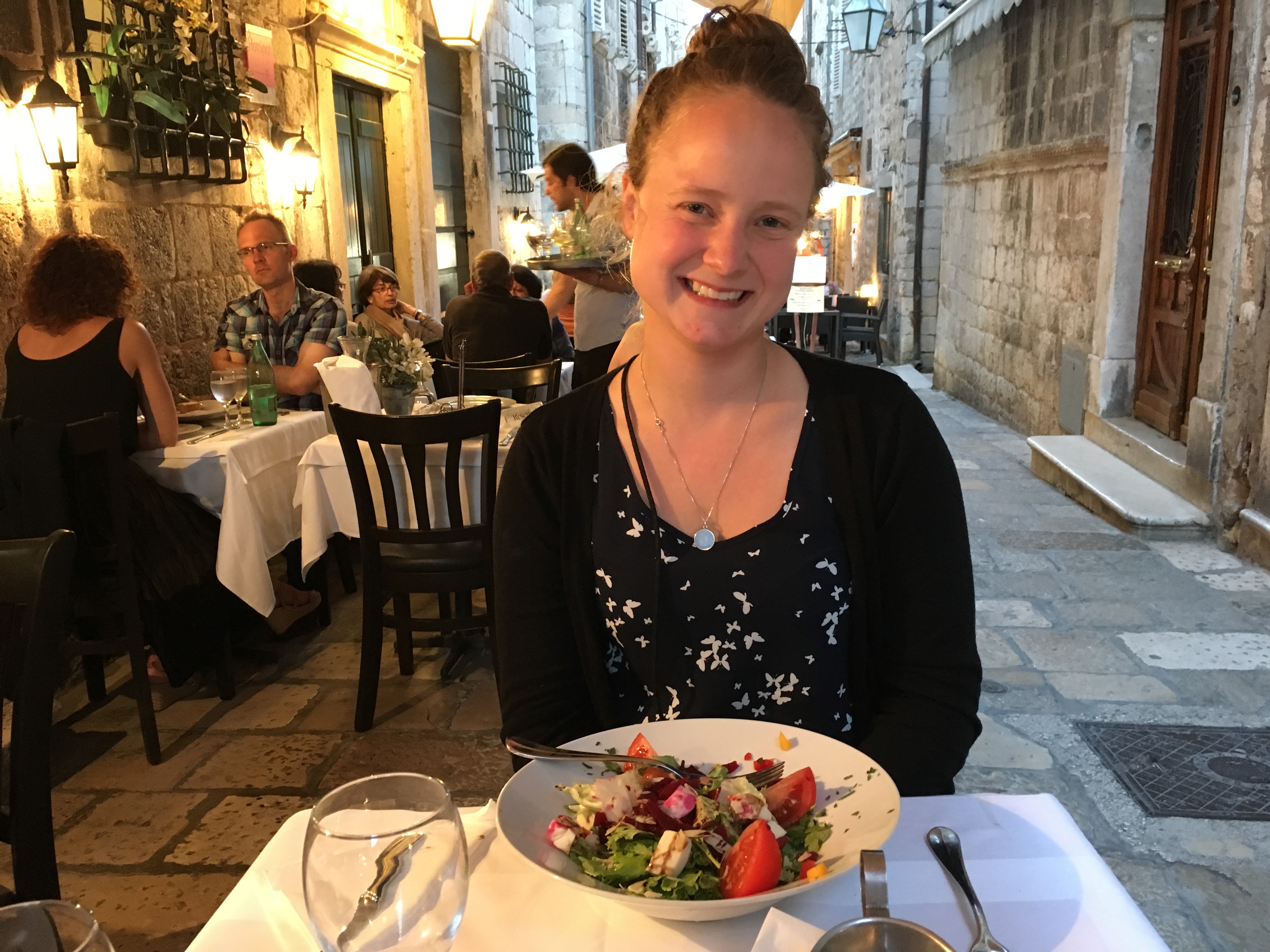 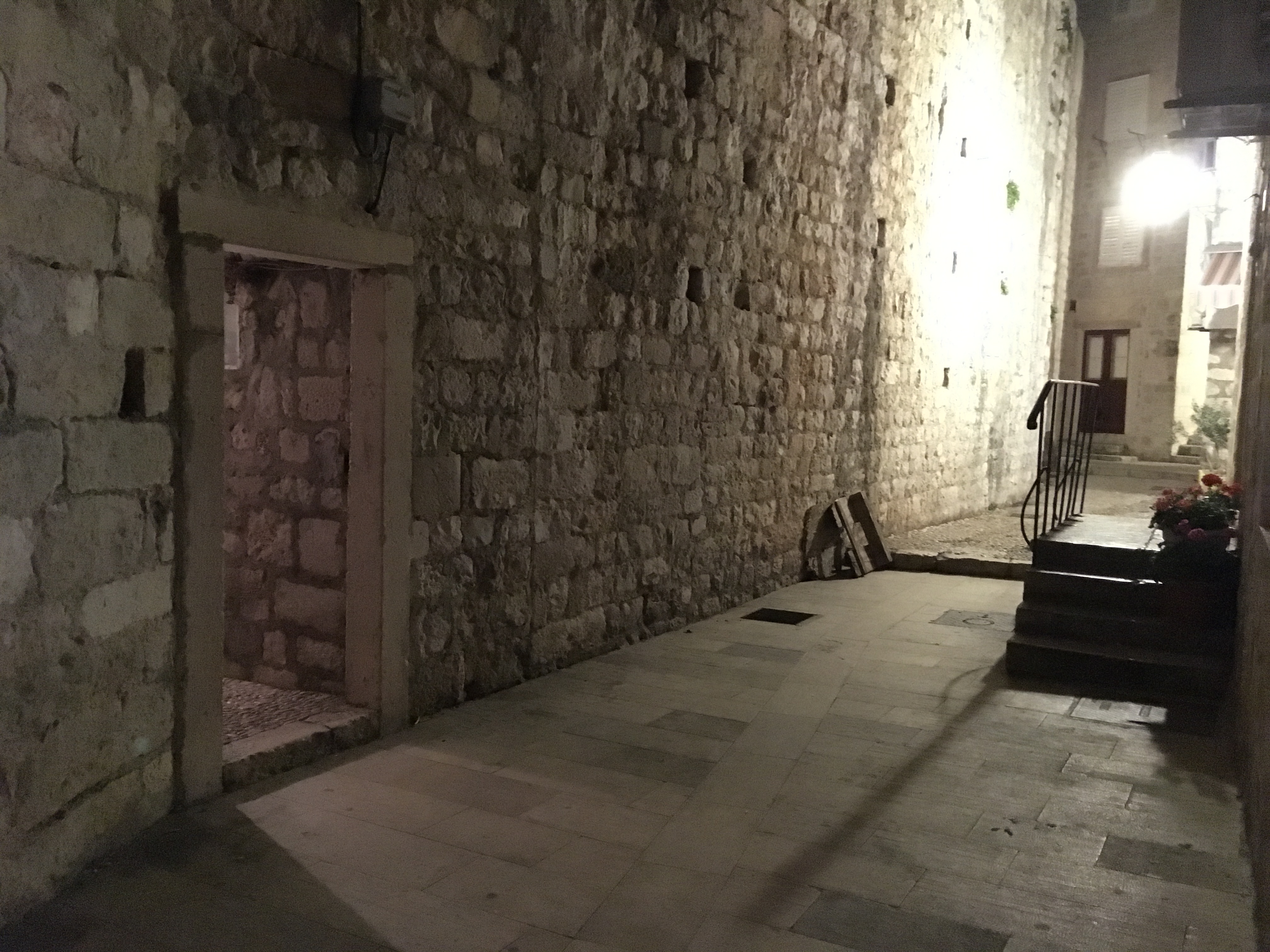 There are several little beaches on the Adriatic Sea just outside the walls. There was no sand, just slippery rocks, so it was hard on the feet. The water was incredibly clear. 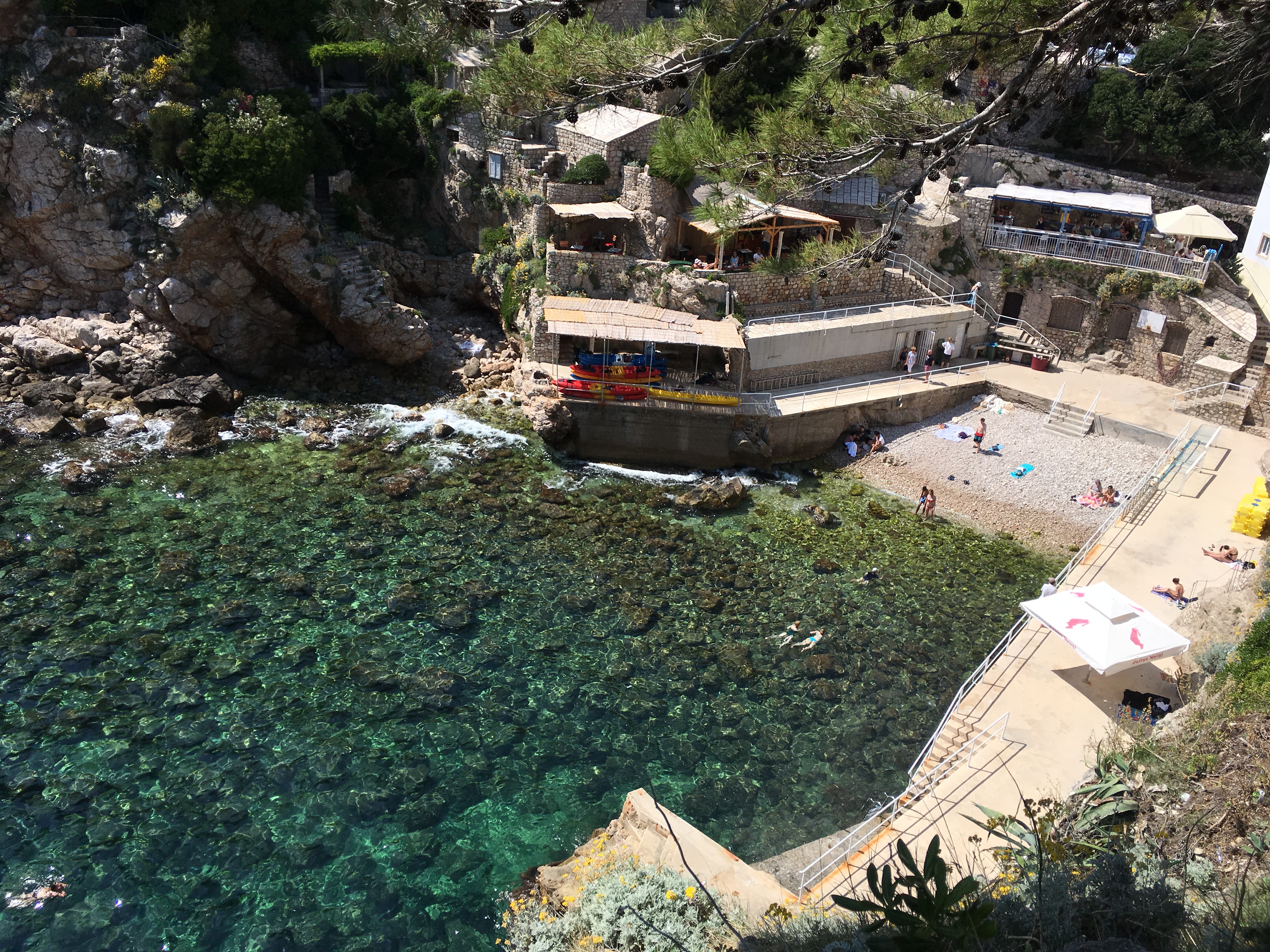 We decided to take a sunset kayaking tour, and with the GoPro I could take some nice pictures. 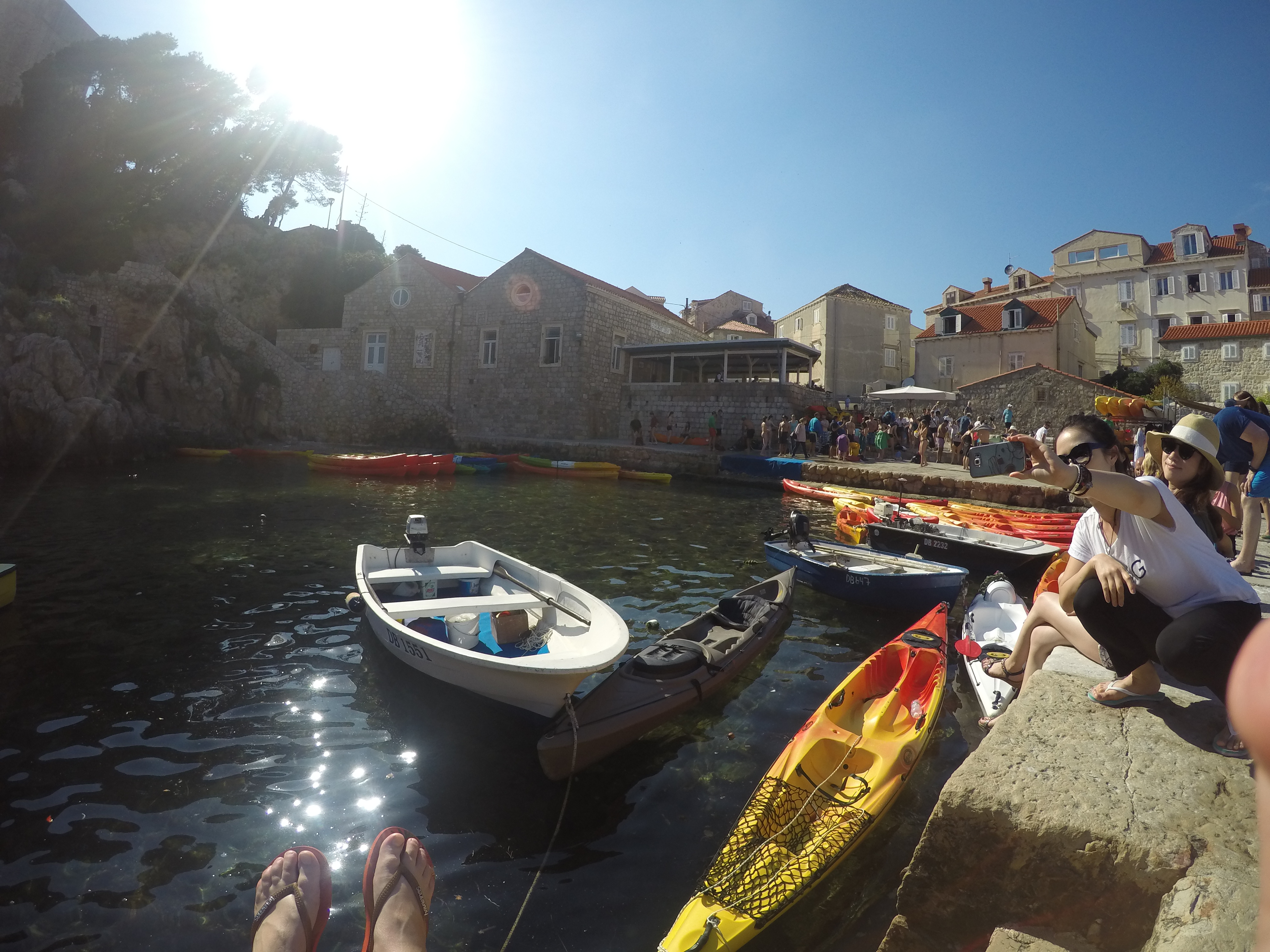 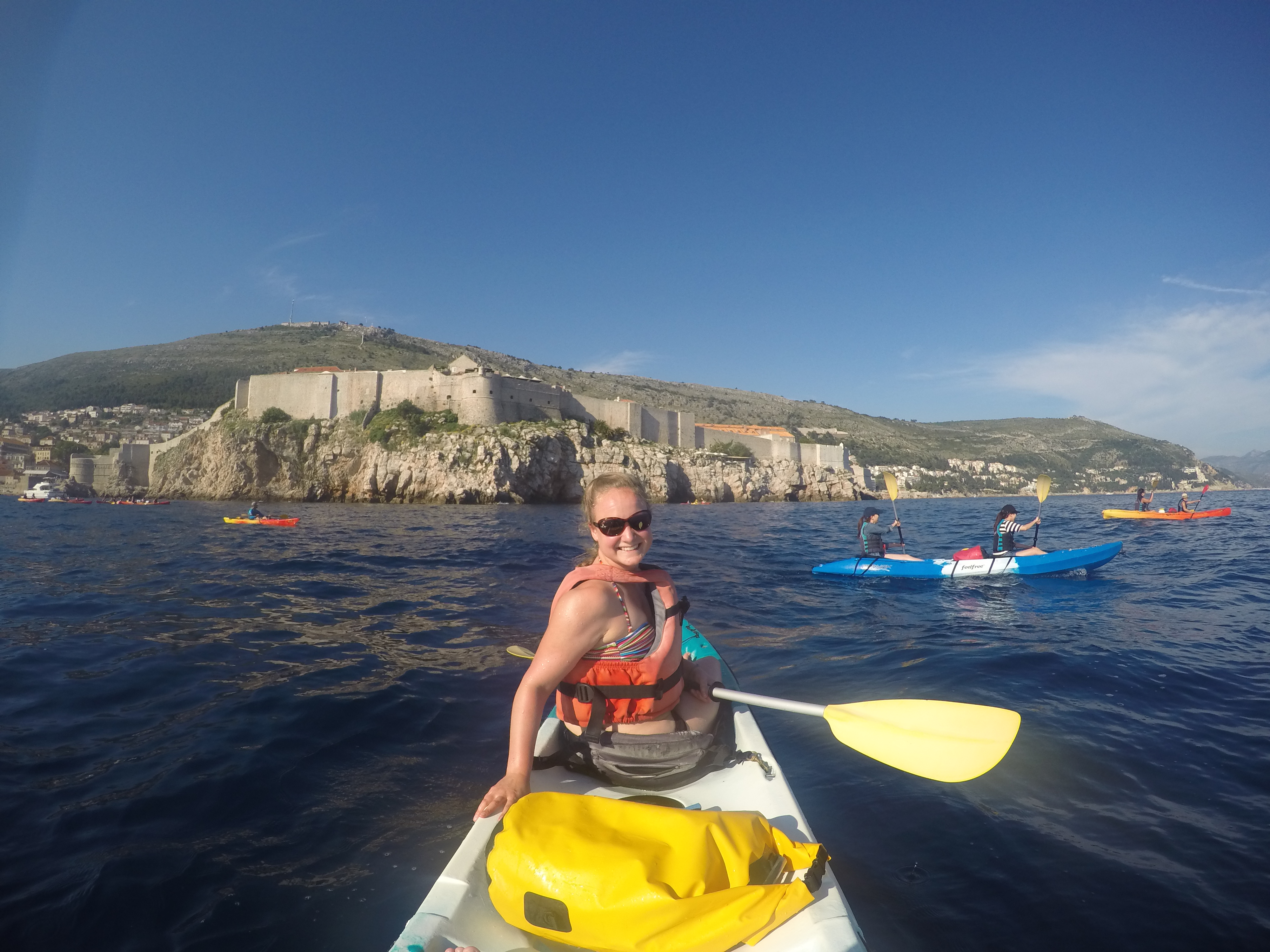 The tour left from the secluded beach. We kayaked out into the ocean, past the city walls, and around the island, Lokrum. We paddled into a cave and through the rocks. Our guide stopped several times to tell us some history of the region. 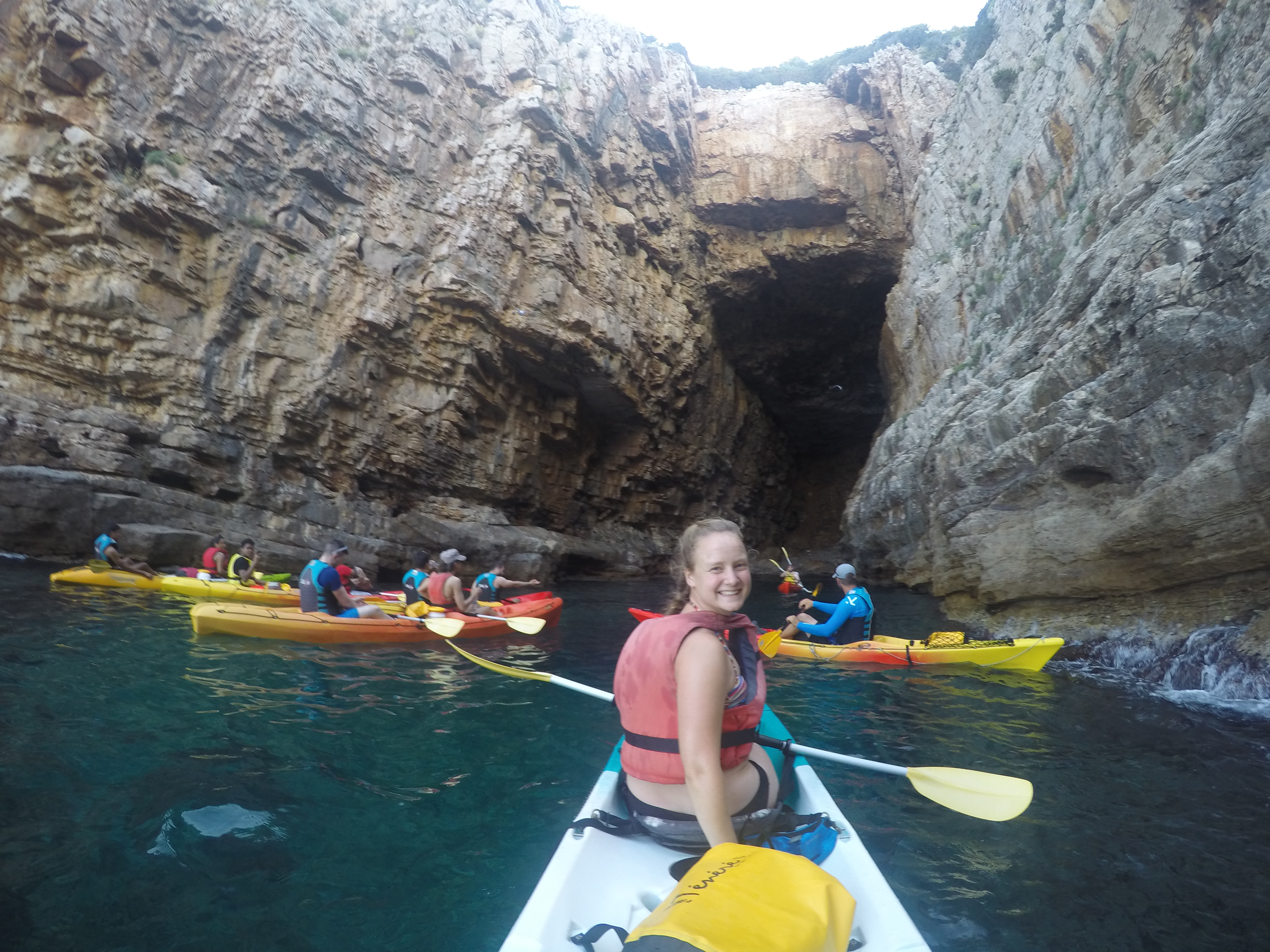 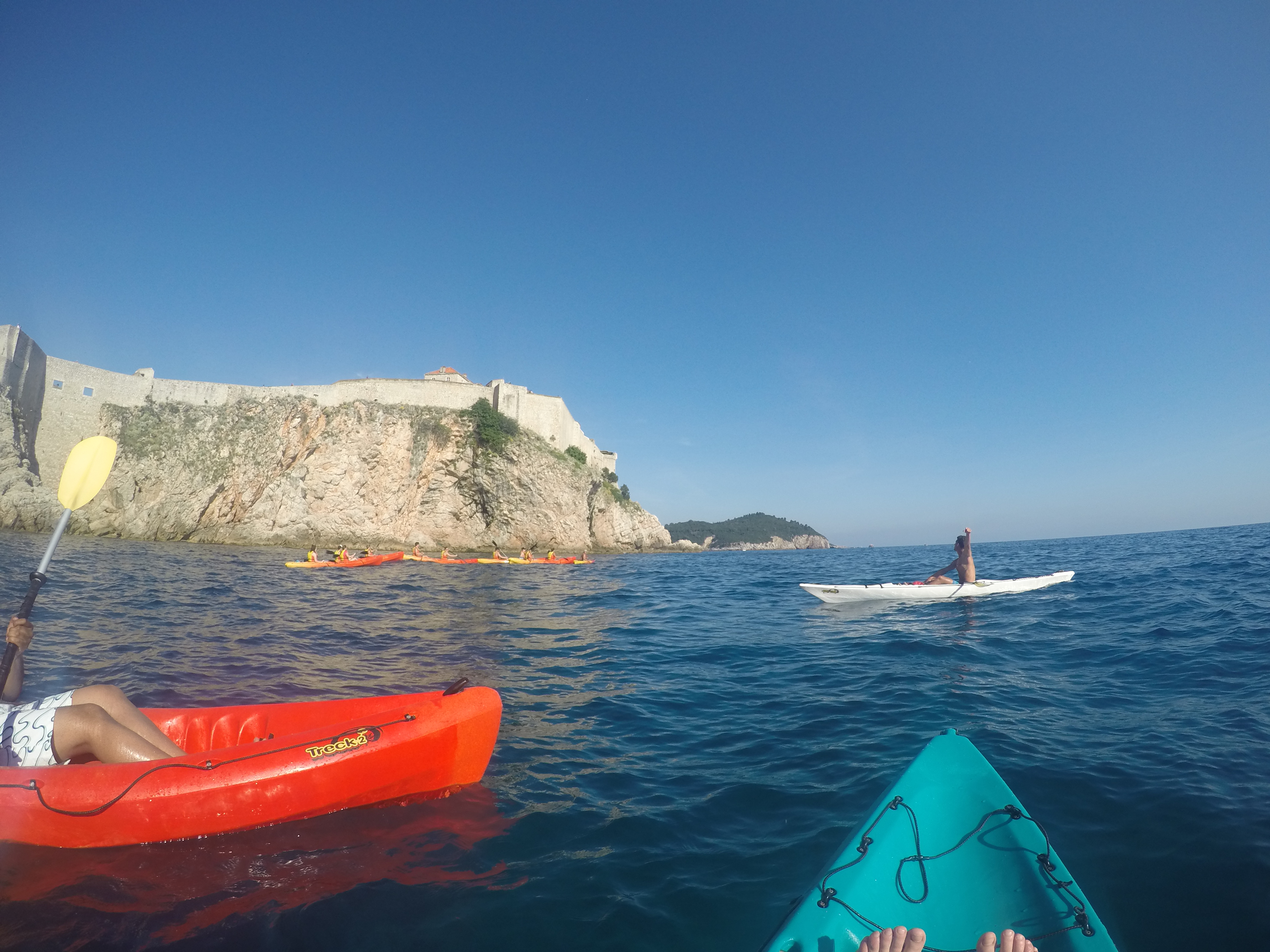 We went to a beach cave on the mainland where we took a break and people swam and jumped off the cliffs. 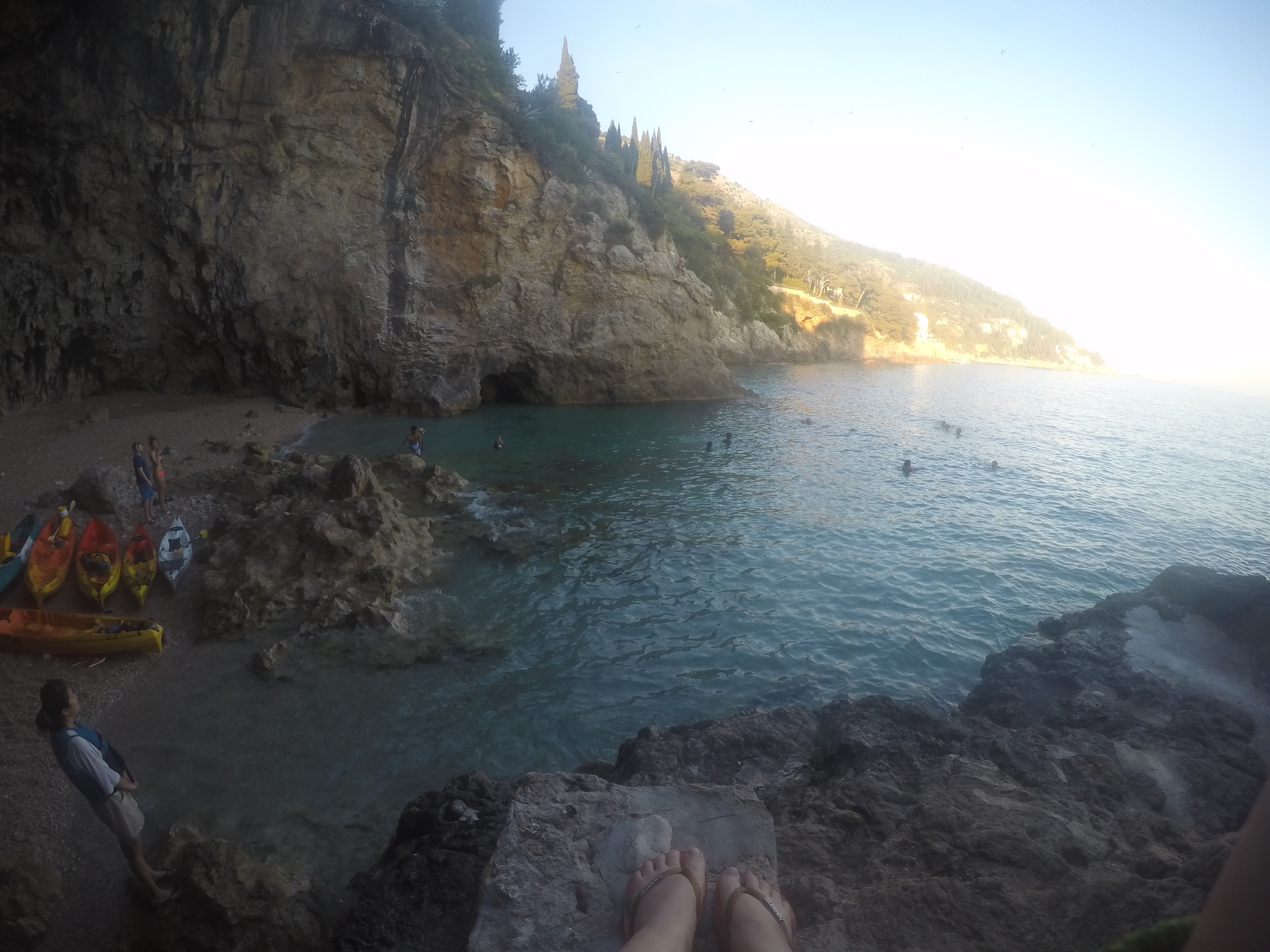 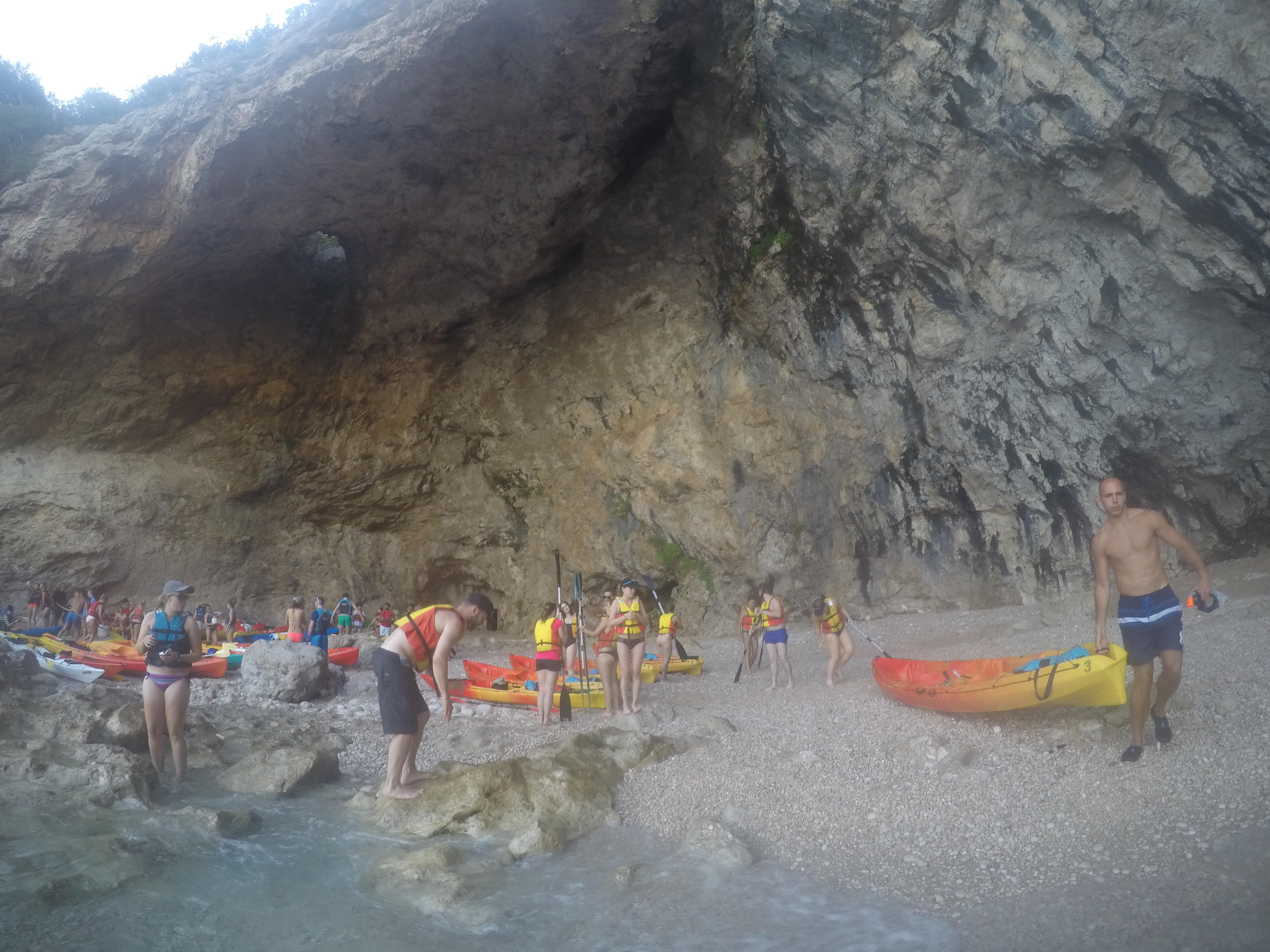 We ended the trip kayaking toward the city watching the sunset behind the walls. It was about a 7.5km trip and one of my favorite activities overall.