John Fraser Ramsey was born Dec. 17, 1907, in Lawrence, Kansas, as the only child of Joseph Reeves Ramsey and Della Frazer Ramsey. At the age of 8, his family moved to Glendale, California and at the age of 12 to Long Beach, California, where he graduated from Long Beach Polytechnic High School in 1927. While in high school, he was editor of the “Caerulea” (school yearbook), president of the Glee Club and school orchestra, a member of “High Life” (school newspaper), and a prominent debater on the debate team. 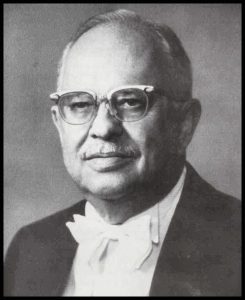 high school he attended the University of California at Berkeley, where he majored in European history and minored in political science. He received his bachelor’s degree with honors in history in 1931 and his master’s degree in history in 1932. While pursuing his Ph.D., he worked as a teaching assistant from 1932 to 1935 and spent 6 months in Paris and London in 1934 doing research on his dissertation. He received a Ph.D. in modern European history in 1935 from the University of California at Berkley.

While at the University of California, John was initiated at the California Gamma chapter of Phi Kappa Psi in 1928. John’s father, Joseph R. Ramsey (Kansas Alpha 1901) was present at both the pledging and initiation of his son. In his senior year, John served as president of California Gamma. John’s mother also had greek ties as a member of Kappa Alpha Theta.

John was responsible for the successful establishment of the Alabama Alpha Chapter of Phi Kappa Psi, which was chartered at The University of Alabama on Feb. 29, 1964. He served as chapter and faculty advisor to the Alabama Chapter from its inception as a colony in the spring of 1962 until 1975.

John Ramsey came to The University of Alabama as a history instructor in 1935 and, except for 3 years during World War II, he remained a member of the faculty for 42 years, being promoted to full professor in 1947. During World War II, he served his country as civilian head of the Department of Maps and Charts, Santa Anna Army Air Base, 1942-1943; Assistant Coordinator of War Training Programs, Washington State University 1943-1944; and Senior Historian for Air Staff Intelligence at the Pentagon, 1944-45.

John Ramsey’s honors and accomplishments at Alabama include:

He also served as the President of the Alabama Council for the Social Studies, 1960-1962; the Arts & Sciences Faculty Senate, 1968-1969; and the Alabama Association of Historians, which has named its Annual Award “The John F. Ramsey Award of Merit” in recognition of his service as founder of the association. John Ramsey’s dedication to the advancement of education is further reflected by his publications, which include Anglo-French Relations 1763-1770; A Study of Choiseul’s Foreign Policy. John traveled and studied extensively in Spain during the summer of 1962 and later authored a book, Spain: The Rise of the First World Power.

John Ramsey held memberships in the American Historical Association, the American Association of the University Professors, the Alabama Association of Historians, Phi Beta Kappa (academic), Phi Alpha Theta (history), Pi Sigma Delta (Spanish), Omicron Delta Kappa (service), Phi Kappa Psi (social, being founder of the Alabama Chapter in 1964), Jasons (senior men’s honorary) honored him at his retirement by inducting him into the organization for the second time, the only person inducted twice, the Alabama “A” Club (honorary), and Phi Eta Sigma (honorary).

He has been honored as the recipient of many distinguished University of Alabama awards including: the Algernon Sidney Sullivan Award for service to the University, and the Carlton K. Butler Award for service to the University. He was honored by students as the first recipient of the Alabama Residence Halls Council Distinguished Professor Award, and later in his career received the award a second time. He was the first recipient of the Omicron Delta Kappa Walter Guyton Award. He received the National Alumni Association of The University of Alabama’s Outstanding Commitment to Teaching award. He brought national honor to himself, the College of Arts & Sciences, and to The University of Alabama as a member of the Health, Education, and Welfare State-based Committee on the Humanities and Public Policy.

Serving in the classroom at every academic level from instructor to full professor, he won the respect and admiration of the entire University community. In May 1977, UA celebrated his accomplishments by conferring upon John Ramsey the highest award The University of Alabama can bestow, the Doctor of Humane Letters degree. This marked the first time a retiring professor of the University had been so honored. When the question of the precedent was raised concerning the award, Dr. Richard Thigpen, then acting President of the University, said, “There is really no problem of precedent because there is only one John Ramsey.”

At his retirement in 1977, several hundred of his friends and associates gathered in Tuscaloosa to pay tribute to this great man who had been an inspiration to the students and faculty at the University for 42 years. At his retirement banquet, his legacy of students and many friends gave thanks to John Ramsey for the assistance, both emotional and financial, that he had provided while they were in school at the University. Although everyone at the banquet told of John Ramsey’s countless good deeds, there was a touch of sadness in the air, for we all knew that “Mr. Faculty” was stepping down and that the University would never be quite the same.

In noting John Ramsey’s retirement, the faculty of the College of Arts and Sciences adopted a Resolution to honor him.

Following his retirement, many friends and admirers established the first University endowed scholarship in his honor to be known as the John Fraser Ramsey Award. The initial Ramsey Award was a $1,000 cash award.The award is presented annually at Honors Day to an outstanding junior at the University who has an exemplary academic record and is a person with broad humanistic interests, and who has demonstrated selfless leadership and has served as a positive role model for his or her contemporaries. Since 1994, the award has also offered each recipient an opportunity to supplement their academic education through an international travel experience. This facet of the award was named the “John Ramsey Great Ideas Tour” to commemorate a two-semester senior level inter-disciplinary course that John was noted for at the University entitled “Great Ideas of Western Civilization,” the first inter-disciplinary course taught at the University.

Following his retirement, John continued to stay active serving as president of the University Retired Faculty Association and was a frequent guest lecturer at the University. Due to declining health and at the urging of his friends, John agreed to move to the home of Bill and Rachael Cadenhead in Florence, Alabama. All of John Ramsey’s friends and admirers owe the Cadenheads a great debt of gratitude for caring for our friend during his last years.

The Cadenheads brought John, although he was in very poor health, to Tuscaloosa for one last visit on Jan. 29, 1983, to celebrate Founders Day of Phi Kappa Psi. A champagne reception was held at the newly restored fraternity house and the house was dedicated in honor of John Ramsey, who had founded the Alabama Alpha Chapter. Phi Kappa Psi National President John K. Boyd, III, Executive Director Gary B. Angstadt, and Past National President John R. Donnell, Jr., were in attendance as were hundreds of Phi Psi alumni, University faculty, staff, and friends.

Less than 3 weeks following Founders Day, John passed away quietly from heart failure, following his noontime Bloody Mary, on Feb. 16, 1983, at the age of 75.

The Board of Trustees of the University of Alabama noted the death of John Ramsey through Senator Howell Heflin who entered into the Congressional Record on March 10, 1983 “A Tribute to Dr. John F. Ramsey.”

Reflections of the Life of John Ramsey