The John Fraser Ramsey Award honors a distinctive kind of excellence. It is not merely a service, leadership, or academic award – although recipients have, by their contributions to the University, their spirit of cooperation, and their academic achievements – demonstrated their abilities in these areas. Rather, the Ramsey Award is intended to recognize the versatility of gifts and attainments, as well as the breadth of excellence in mind and character that have traditionally been the goals of a liberal education.

The award is made in honor of Dr. John Fraser Ramsey, a history professor at the University of Alabama. During his 42 years at the University, John Ramsey was not only a professor, but an example, a counselor, and a friend.  He earned, many times over, the respect and admiration of all who knew him, both inside and outside of the University community.

A recipient receives $7,000 for winning the Ramsey Award. In 1994, the Ramsey Board began offering recipients the opportunity to supplement their academic education with a student-planned European travel experience. This facet of the award was named the Great Ideas Tour to commemorate John Ramsey’s signature course at the University, Great Ideas of Western Civilization. In addition to the cash award, a recipient is also offered $4,000 in support of a Great Ideas Tour.

The Ramsey Award is unique among the University of Alabama Premier Awards in that the annual recipient becomes a part of the Ramsey Family; A network of individuals dedicated to continuing the legacy of Dr. Ramsey. They reunite on campus each year for the annual Ramsey Awards banquet in the spring and help prepare and support  the current recipient on their own Great Ideas Tour.

“While understanding your place in a community and that community’s place in the nation is vital for identity, seeking to understand your place on planet Earth is what it means to call yourself a global citizen.  Realizing fully what this place is would require a lifetime of travel, it is a constant pursuit.” 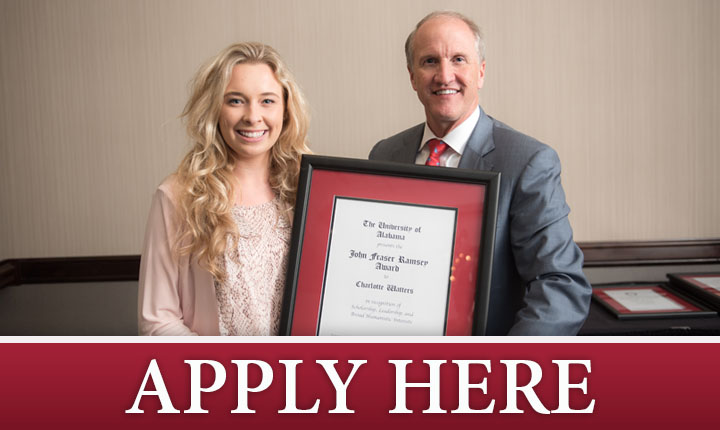 One Junior will be selected for the award, which includes a trip to Europe and a cash sum totaling $7,000. This monetary and travel award is given annually to a student enrolled full time at UA who has achieved a 3.3 or higher grade point average on a 4.0 scale. 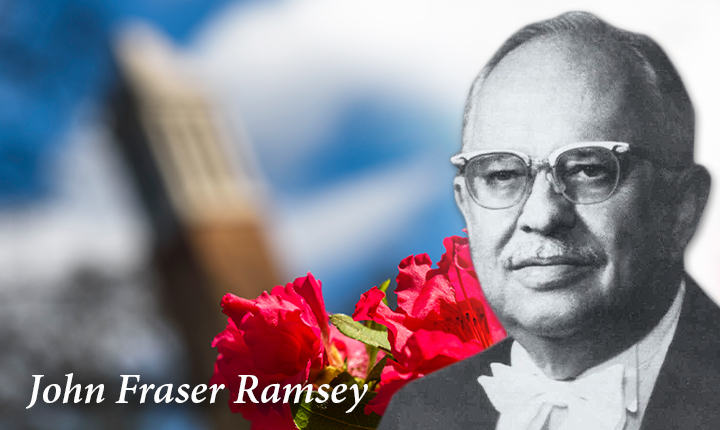 John Fraser Ramsey was born Dec. 17, 1907, in Lawrence, Kansas, as the only child of Joseph Reeves Ramsey and Della Frazer Ramsey. At the age of 8, his family moved to Glendale, California and at the age of 12 to Long Beach, California, where he graduated from Long Beach Polytechnic High School in 1927...